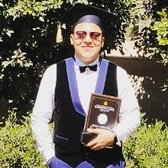 Hey Friends, The opinions expressed here are mine and do not necessarily reflect that of my groups, i